Washington, D.C.– Today a bipartisan group of 18 U.S. senators urged Secretary of State Mike Pompeo and the Administration to increase the United States’ pledge to the Global Fund to Fight AIDS, Tuberculosis and Malaria (The Global Fund) for 2020-2022.  The U.S. pledged $4.3 billion for the last three-year funding cycle in 2016.

“The Global Fund partnership has saved many millions of lives since 2002. Given the Global Fund’s impressive results and the continuing, urgent priority to save lives and end three of the major infectious disease killers in the world, we believe the United States should make a 6th Replenishment pledge for 2020-2022 that exceeds the last Replenishment.”

“We applaud the leadership of Senator Graham and Senator Leahy, and of all the Senators who wrote to Secretary of State Pompeo,” said Chris Collins, President of Friends of the Global Fight Against AIDS, Tuberculosis and Malaria. “U.S. support for the Global Fund continues to produce tremendous results, and because the U.S. contribution leverages funding from other donors, it remains a smart, strategic investment.  The Global Fund is highly effective, but a stepped-up global effort is needed to end the epidemics of AIDS, TB and malaria.  That is why an increased U.S. pledge is so important this year.”

The world’s largest global health financing organization, the Global Fund is a partnership between governments, civil society, the private sector and people affected by HIV/AIDS, tuberculosis and malaria. It invests nearly $4 billion a year to support programs run by local experts and governments in countries and communities most in need. Global Fund-supported programs have saved more than 27 million lives since the organization was founded in 2002.

“Next year donors will meet for the Global Fund’s 6th replenishment,” said Jonathan Klein, Board Chair of Friends and Co-founder and Chairman of Getty Images. “Now is a critical time to show the world that the U.S. is committed to effective programs making steady progress toward ending the most devastating epidemics.  Since by law the U.S. cannot contribute more than 33 percent of total Global Fund financing, a bold U.S. pledge encourages other donors to increase their own investments in the Global Fund.”

“The U.S. investment in the Global Fund does more than save lives and fight diseases – it helps keep Americans safe and benefits our diplomatic and trade relationships. The rapid spread of a new infectious disease is among the most likely scenarios to cause the deaths of tens of millions of people. U.S. global health investments, including through the Global Fund, build stronger disease surveillance and health delivery systems, helping the United States by addressing health threats before they reach our shores. It is an investment in U.S. security, and in countries that are critical markets for U.S. exports.”

The full Senate letter to Secretary Pompeo is available below. 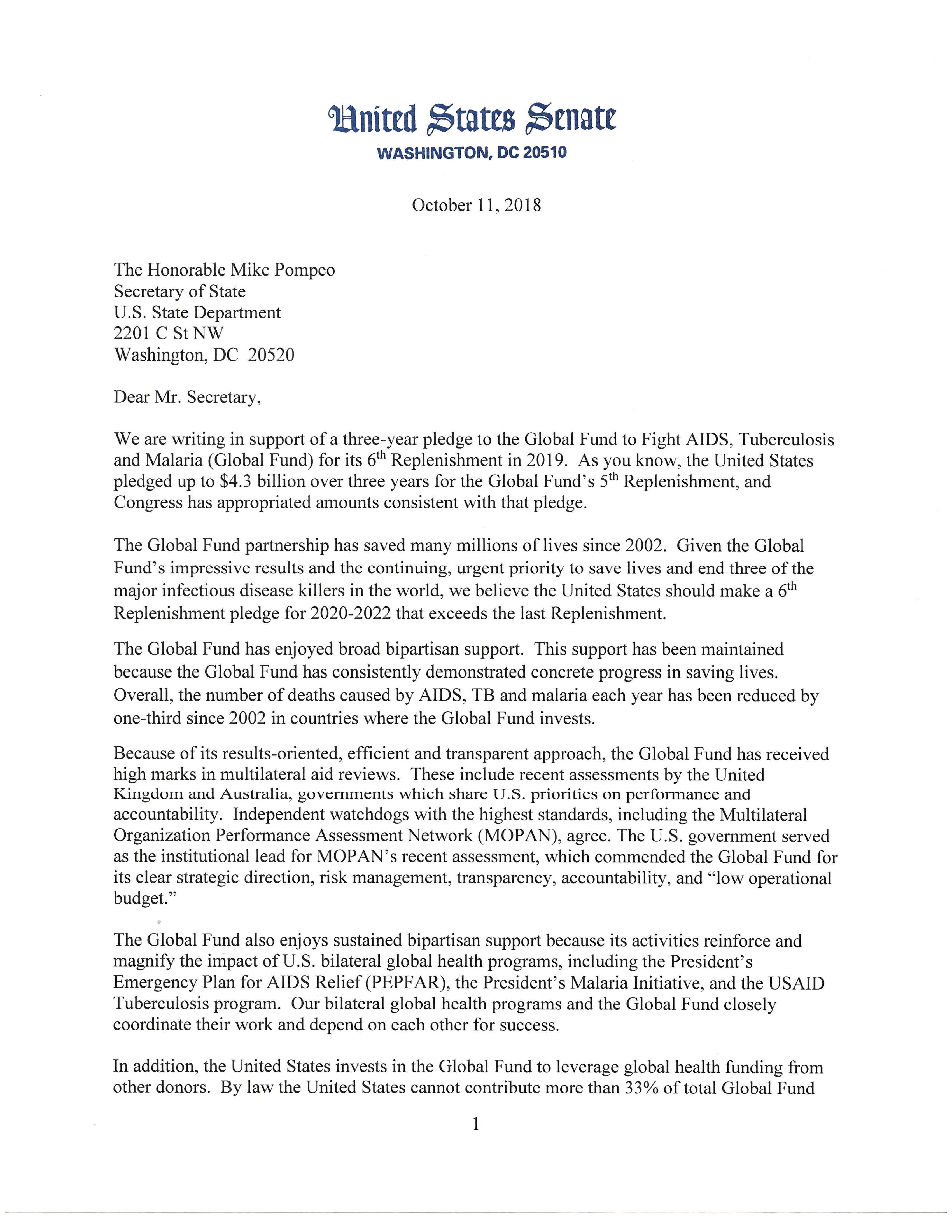 ABOUT FRIENDS OF THE GLOBAL FIGHT AGAINST AIDS, TUBERCULOSIS AND MALARIA