Note: This information is now out of date. To see the most up to date information about these independent assessments, click here. (7/8/2020)

Four serious, reputable reviews by international agencies and donors have given high marks to the Global Fund to Fight AIDS, Tuberculosis and Malaria (Global Fund). Two were conducted by governments sharing U.S. priorities on performance and accountability (the United Kingdom and Australia), and two by non-governmental watchdogs with high standards (the Multilateral Organization Performance Assessment Network – or MOPAN – and PublishWhatYouFund).

Areas of consensus in these assessments include: results, value for money, organizational strength and transparency. 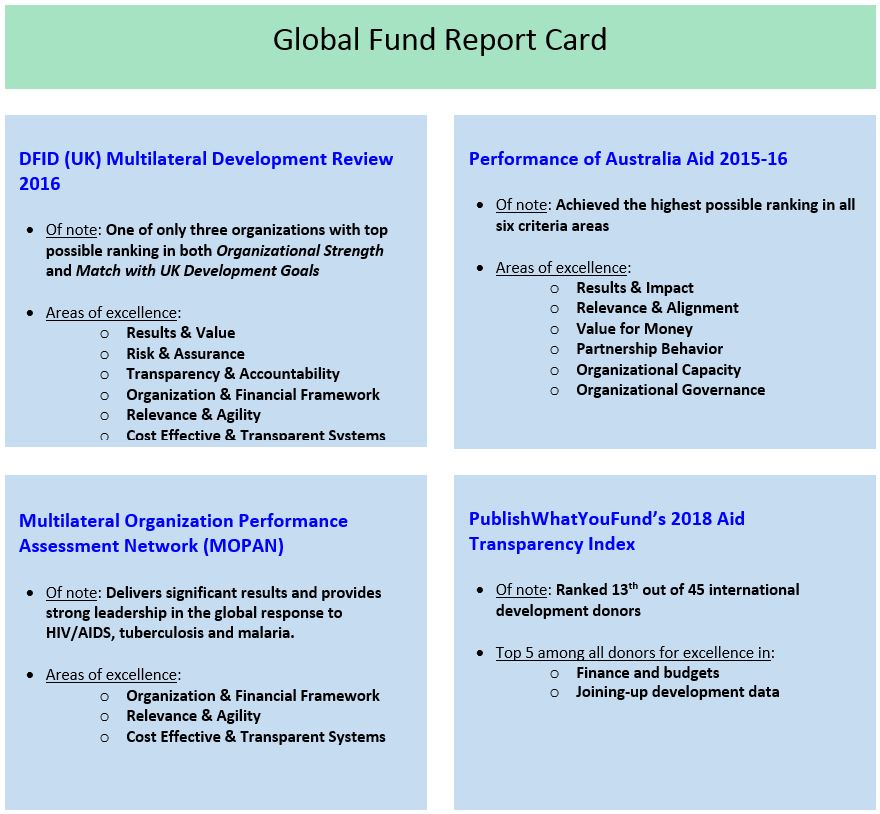 Each of the reviews has slightly different premises and approaches. The United Kingdom’s Department for International Development performs Multilateral Development Reviews to assess which organizations to fund – with a focus on results, value for money, transparency and accountability. The reviews are meant to help align funding with U.K. Development Goals regarding what an organization does, how it delivers, and where it works. The late 2016 review of the Global Fund directly influenced the decision to increase funding from £800 million in the Global Fund’s 2014-2016 replenishment cycle to £1.1 billion for 2017-2019.

Australia’s Department of Foreign Affairs issued a similar assessment of aid recipients in its 2015-16 report, released in May 2017. The Multilateral Performance Assessment found the Global Fund has greatly improved its strategic leadership and governance, and made financing more predictable through a needs-based allocation methodology. It found that the Fund’s counterpart financing requirements have helped increase domestic investments (by withholding 15 percent of funds unless the local government itself stepped up and invested). It called the Global Fund “a world leader in mobilizing private sector finance and expertise.”

PublishWhatYouFund is a high-profile global campaign for aid transparency launched in 2008. Its objective is to raise the visibility and quality of data on aid and development, and to encourage the use of data in decision-making. Unlike the others, it is more singularly focused on openness of information, and first published its annual Aid Transparency Index in 2011.

The Global Fund has demonstrated its ability to evolve and improve efficiency and transparency. The recently-released Australian aid assessment found significant reforms undertaken by the Global Fund over the period of its 2012-2016 quadrennial Strategy period, particularly regarding fraud prevention and control. The Fund is, of course, not perfect, and it is progressing to improve. For instance, MOPAN found the Global Fund’s work on addressing gender inequality was not yet satisfactory because its recent efforts simply have not been in place long enough to have a measurable impact.

The overall picture from these four assessments is that the Global Fund is a very strong public-private partnership – impactful, innovating and improving.

On August 3, the Center for Strategic and International Studies (CSIS) interviewed Chief Medical Advisor to the President and Director...

Human Rights are Essential to True Pandemic Preparedness and Response

By: Chris Collins and Mark P. Lagon Glaring disparities in COVID-19 vaccine access have put global health inequity in the...