The following post was originally published at Devex on Oct. 30, 2017.

In our increasingly interconnected world, people, products, and even services cross borders every day. Unfortunately, diseases are able to cross those same borders, imperiling communities near and far. But we have the power to fight this looming threat. By investing in global health programs, governments and private sector partners can help save lives and stop epidemics in their tracks.

The U.S. has a history of strong bipartisan support for, and leadership on, global health. These investments see significant returns by helping to protect U.S. health security through the containment of disease outbreaks and the resulting economic toll. Here are the top three reasons why fighting infectious diseases abroad both maximizes and delivers returns on U.S. investments:

Continued investment in global health protects against massive loss of life. Just think back to past outbreaks. The flu epidemic of 1918 caused 50 million deaths. That’s more lives lost than in all of the wars of the 20th century combined.

U.S. leadership could help end the epidemics of AIDS, tuberculosis, and malaria within a generation, but only if we can build on progress made over the past 15 years.

The returns on global health investments are tremendous. Between 2000 and 2015, the number of AIDS-related deaths dropped by 28 percent, malaria deaths dropped by 50 percent, and TB deaths dropped by 22 percent. Global health funding, which is a tiny fraction of the U.S. federal budget, not only tackles disease, but also shields us from the serious economic impact of disease outbreaks. The 2003 SARS outbreak alone cost the global economy approximately $30 billion.

“Support for infectious disease programs is a win-win, giving everyone a chance to live a healthy and more secure life.”
— Chris Collins, Friends of the Global Fight Against AIDS, Tuberculosis and Malaria

Despite significant progress, there is a real risk of stalling or backsliding on efforts to end these epidemics. For example, TB is now one of the leading infectious disease killers globally. In the U.S. alone, TB infected nearly 10,000 people in 2015 and cost our economy about $450 million.

The U.S. Congress is on track to approve steady funding for global health programs. But a recent report from the Bill & Melinda Gates Foundation demonstrates that increased donor investment, as well as innovative financing and more investment by developing countries themselves, will be necessary to prevent backsliding on the hard-won progress made to date.

Investment in preparedness, prevention, and control is ultimately more cost-effective than fighting an outbreak after it begins to spread. If preventative funding is put into place, the world can save countless lives and avoid spending even more on economic recovery.

Recent studies have shown that the rapid spread of disease is a security threat that can cost tens of millions of lives. Nearly 75 million people visit the U.S. every year, and in 2016 Americans took more than 80 million trips overseas for business, vacation or family visits. Approximately 9 million non-military citizens live abroad and nearly 300,000 U.S. military personnel are stationed in other countries. Through global health investments, the world can address epidemic threats where they arise — and before they can cross U.S. borders. This is critical to the health security of American citizens everywhere.

Like links in a chain, the world is only as secure as the country with the weakest health system. Only around one-third of countries report that they can comply with the International Health Regulations, a framework created by the international community in 2005 to prevent the spread of disease and other health threats.

As demonstrated by West Africa’s 2014-2016 Ebola outbreak, countries with more health system capacity were better able to contain the disease. To help address the need for capacity in the hardest-hit countries, health partners worked together. For example, the Global Fund to Fight AIDS, Tuberculosis and Malaria stepped up malaria control efforts to help alleviate the pressure put on health systems responding to the Ebola crisis.

A case study of the President’s Emergency Plan for AIDS Relief describes the ways in which strategic health diplomacy can positively impact the health and safety of Americans. In addition to saving lives and providing access to treatment for millions of people, there is evidence to suggest that PEPFAR supports secondary benefits.

In PEPFAR focus countries, for example, poll data showed a more positive opinion of the U.S. Target countries were also found to be more secure, stable and accountable than other countries in the region.

By addressing the prevalence of infectious diseases, global health programs such as PEPFAR help to build more secure and prosperous countries, which in turn serve as stronger partners for the U.S. and its national security goals.

U.S. military leaders firmly believe in the power of global health programs and humanitarian assistance to serve as diplomatic solutions to global challenges. Earlier this year, 120 retired senior military officers signed a letter to Congress in favor of funding the international affairs budget, including programs to fight HIV and AIDS, TB, and malaria. They emphasized that these development efforts help to prevent conflict and ultimately reduce the number of military members who are put in harm’s way.

Additionally, U.S. global health investments, including funding for the Global Fund, can correlate with more positive impressions of the United States. Surveys show that Africa, where U.S. bilateral health programs have been largely concentrated, is the only region in the world where favorable opinions of the U.S. exceed the global average. Global health investments, such as the President’s Emergency Plan for AIDS Relief, support American diplomacy by generating goodwill, accelerating development, and reducing social and political instability in countries with heavy disease burdens.

The world is at a tipping point in efforts to end deadly epidemics. By growing these investments, we keep U.S. interests in the driver’s seat, encourage developing countries to invest more in their own health, and support further global economic growth. Additionally, as this brief highlights, these benefits all occur while controlling AIDS, TB, and malaria and while preventing new epidemic threats from reaching our shores. Support for infectious disease programs is a win-win, giving everyone a chance to live a healthy and more secure life.

Related Tags: global health security
Back to previous page
Engage with us in conversation using @theglobalfight 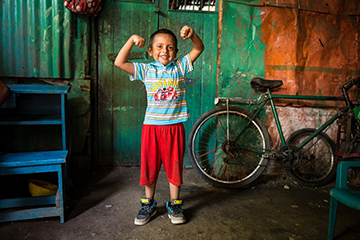 As the global community celebrates the 15th anniversary of the President’s Emergency Plan for AIDS Relief (PEPFAR), PBS’s Great Decisions...

The U.S. government recognizes that its health system is not insulated from the rest of the world, recently taking the...