Reflections from IAS 2019: Policies to End the HIV/AIDS Epidemic

On July 21-24, the International AIDS Society (IAS) annual conference took place in Mexico City and focused, as one presenter aptly put it, on “the beginning of the end of AIDS.” The IAS conference brings together advocates and researchers from around the globe to share ideas and best practices for ending the HIV epidemic. Here are our main takeaways from the conference.

Finding Inspiration from Six Locations Around the World

On July 22, Friends of the Global Fight, along with amfAR and AVAC, launched a new report detailing how progress in fighting the HIV/AIDS epidemic in six locations can inform the end of the epidemics globally. The report, Translating Progress into Success to End the AIDS Epidemic, looks at public policy approaches in San Francisco, London, Malawi, Rakai, Thailand and New South Wales. In a press conference, the report authors identified four key policies to implement globally: scaled, easily accessible HIV testing; treatment for all people living with HIV; scaled prevention, particularly of pre-exposure prophylaxis (PrEP) or similar medicines; and efforts to reduce stigma that prevent those living with HIV from accessing treatment.

During the press conference, Dr. Anthony Fauci, director of the National Institute of Allergy and Infectious Diseases, said, “We can firmly say now we do have the tools that we need in treatment and prevention to end the epidemic. Particularly if you look at treatment as prevention and at PrEP….We have to optimize the implementation of already existing tools.”

Stepping Up the Fight Against AIDS in Latin America

The Global Fund to Fight AIDS, Tuberculosis and Malaria hosted a panel discussion of the barriers to ending the HIV/AIDS epidemic in Latin America, given the location of this year’s conference in Mexico City. Marijke Wijnroks, chief of staff of the Global Fund, said that while the region is moving forward along the 90-90-90 continuum and life expectancy has gone up, there is still much work to be done to eliminate HIV. In particular, key populations account for 75 percent of new infections in Latin America.

While many countries in Latin America have prioritized access to primary care, there are still significant barriers to accessing care for those living with HIV.  Improvements in health have not been equal across income levels, with those in lower income bands accounting for disproportionately higher incidences of disease. This is especially true of indigenous populations across Latin America, who are also 23 percent more likely to be living below the poverty line. An additional concern is that the vast majority of investment in HIV in Latin America is for treatment programs, as compared to prevention programs.

PEPFAR Focuses on Women and Girls

As the largest single funder of efforts to combat the AIDS epidemic, the U.S. bilateral program PEPFAR had a prominent presence at the conference. Ambassador Deborah Birx, the U.S. Global AIDS Coordinator and head of PEPFAR, stressed the importance of focusing on adolescent girls and young women as key to ending the epidemic.

In a panel reporting on the progress of the UNAIDS program “Start Free, Stay Free, AIDS Free,” Amb. Birx highlighted the challenges that still exist in ensuring access to treatment for affected populations.  In many countries, access to care is a policy debate and fees for care are preventing women from accessing treatment. For example, when Burundi removed fees, access to care grew from 50 percent of the population to almost 90 percent.  Amb. Birx also highlighted that ensuring access to care and treatment has been a particular challenge for urban young women across sub-Saharan Africa. Programs must tailor treatment to the particular needs of young women to make it easier for the patients to access facilities.

In addition, the conference included many presentations from scientists and researchers working on innovative technologies and medicines to treat and prevent the spread of HIV.  These included biomedical implants that could dispense antiretroviral medicines or PrEP to prevent the transmission of HIV.  Researchers discussed the effects of antiretrovirals on child development, training of lay and community health workers to address the spread of HIV in key populations and additional opportunities to coordinate tracking and data collection across multiple multinational grant making entities, like PEPFAR and the Global Fund.

Overall, conference attendees were optimistic. As nearly every meeting and panel referenced, it is possible to end the HIV epidemic by 2030, in keeping with Sustainable Development Goal 3, but it requires the investment of time, money and capital on a global scale. 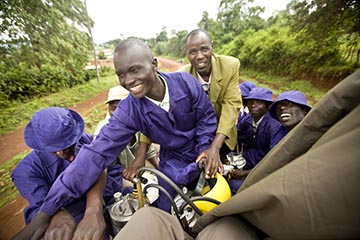 Click here to download PDF copy of the letter. STATEMENT ON THE GLOBAL FUND BY: Elton John, Pastor Rick Warren,...

Around the world, donors are increasing their contributions to the Global Fund to Fight AIDS, Tuberculosis and Malaria. Click here...