Multiplier for U.S. Policy: The Global Fund and HER (HIV Epidemic Response)

Incoming Executive Director of the Global Fund, Peter Sands, unveiled the HER – HIV Epidemic Response – initiative at the January 2018 World Economic Forum Annual Meeting, a fitting venue to introduce this new effort to mobilize private sector engagement to empower women and girls in the fight against HIV. HER is emblematic of how the Global Fund is a force multiplier for U.S. foreign policy priorities and global health investments.

In addition to other acutely vulnerable populations to HIV, adolescent girls and young women are rightly a focus of a concerted strategy to end the epidemic. In 2016, new infections among young women aged 15-24 years were 44 percent higher than they were among men in the same age group. This situation threatens to spur a resurgence of HIV in sub-Saharan Africa, where the population between the ages of 15-24 is projected to double in the next decade.

HER builds upon the groundbreaking leadership of the U.S. President’s Emergency Plan for AIDS Relief (PEPFAR) and its DREAMS partnership by addressing young women’s needs in 13 target countries. 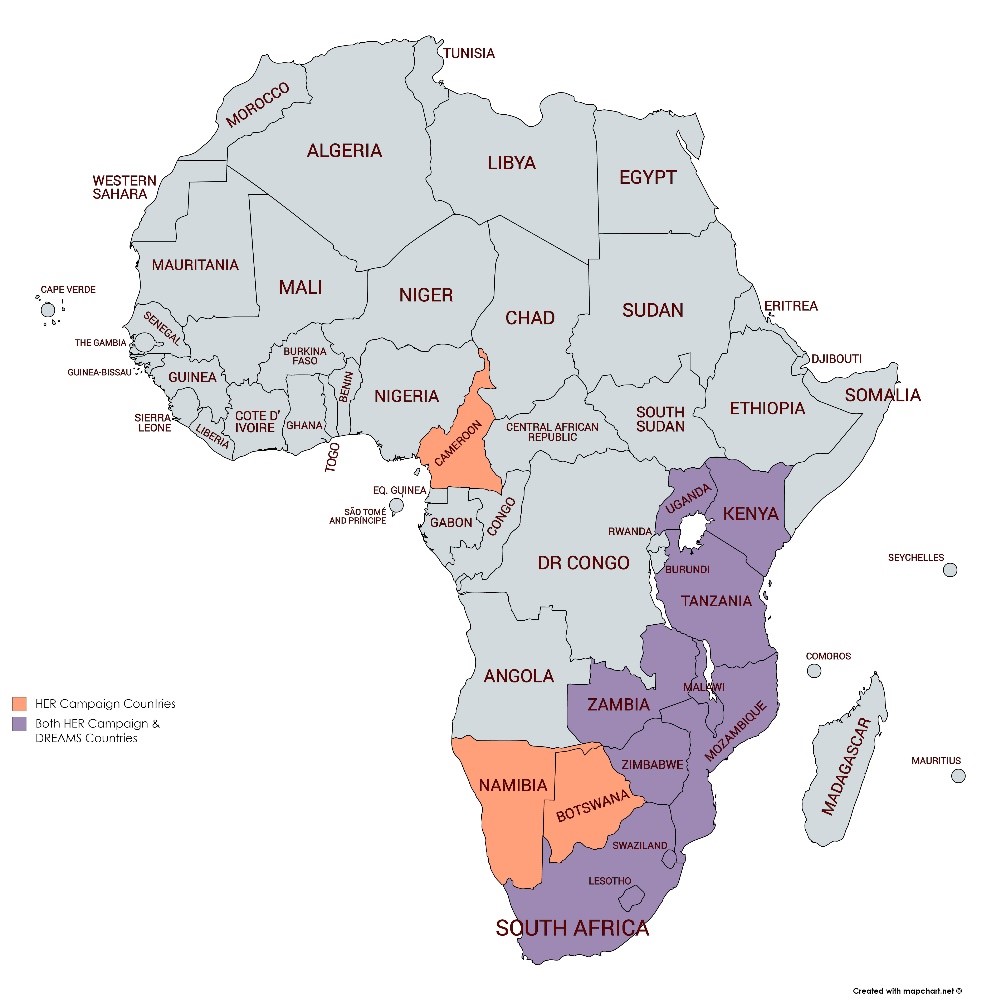 HER has four pillars for private sector engagement: providing financial support; supporting HER Voice, which will help boost young women’s leadership in decision-making and HIV programming; lending in-kind expertise; and raising awareness of these issues. Coupled with the delivery of prevention technology and treatment, these pillars aim to reduce the number of new HIV infections among adolescent girls and young women by 58 percent within five years in the target countries. 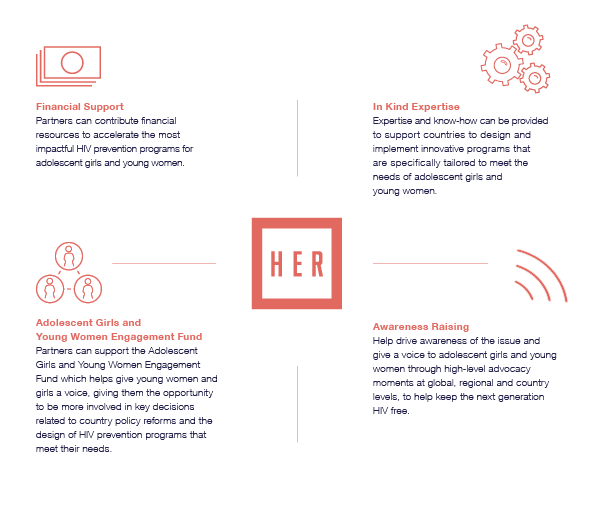 The HER initiative illustrates how the Global Fund amplifies and extends the impact of U.S. policy. First, by mobilizing financial and in-kind support from the private sector, it supplements the resources of government donors and programs. Global Fund partners for HER include: The Coca-Cola Company, Standard Bank, Unilever, ViiV Healthcare, as well as Product (RED), which will expand its operations in Africa with the help of A4A, Coca-Cola and SAP. This epitomizes the Global Fund’s design since its inception during the George W. Bush administration as a partnership between governments, civil society, the private sector and people affected by the diseases.

Moreover, HER will accelerate impact in all 10 PEPFAR DREAMS countries in sub-Saharan Africa (see map above). DREAMS, a partnership between PEPFAR and the Bill & Melinda Gates Foundation, Girl Effect, Johnson & Johnson, Gilead Sciences and ViiV, is demonstrating tremendous progress:

HER will reinforce and accelerate this U.S. endeavor, further tying together medical interventions with empowerment and voice for women. Because PEPFAR is introducing DREAMS-like interventions in countries also targeted by HER (Cameroon, Botswana and Namibia), there may be further opportunity for the programs to reinforce each other’s impact.

Ten[1] of the 13 HER target countries also overlap with the 13 high-burden countries PEPFAR has prioritized in its 2017-2020 strategy. HER’s goal is to continue to bolster the Global Fund’s partnership with PEPFAR to reinforce impact, avoid duplication and scale funding for treatment and prevention. For maximum coordination, the Global Fund participates in PEPFAR’s annual Country Operational Plan meetings with implementing governments and civil society representatives.

Finally, mobilizing private sector investment and know-how in addition to U.S. government funding is not the only way the Global Fund is a force multiplier for American investments. The Global Fund is critical to U.S. global health efforts by leveraging increased domestic investment, as well as financing from other donor governments. Because Congress caps U.S. contributions at 33 percent of the Global Fund’s budget, U.S. donations propel other countries to contribute more for the effort to end HIV, TB and malaria. Absent the U.S. contributions to the Global Fund, that kind of multiplier effect would be squandered.

In short, the HER initiative is important for numerous reasons: It focuses on a particularly vulnerable, yet vital, demographic group that is critical to controlling HIV, and important for sustainable economic development – women and girls. HER brings more private sector donors and partners to the table in taking the fight against AIDS to the finish line. All the more, it vividly demonstrates the Global Fund’s value for money to the U.S. – multiplying the impact of U.S. leadership to successfully defeat the major epidemics of our time and help transition affected countries from international aid to full domestic ownership of their disease responses.

[Mark P. Lagon is Chief Policy Officer at Friends of the Global Fight Against AIDS, Tuberculosis and Malaria (Friends). Annika Holkeboer is a student at the Elliott School of International Affairs at the George Washington University, and a former Policy Intern at Friends.]

[1] HER and PEPFAR each have 13 high-priority countries. The ten countries in common are Botswana, Kenya, Lesotho, Malawi, Namibia, Swaziland, Tanzania, Uganda, Zambia and Zimbabwe.