The Global Fund as a Model of Development Assistance

International assistance to low and middle income countries has historically been financed by bilateral agencies and multilateral organizations. Over the last few years, a number of innovative models have emerged.

One new model is crowdfunding. Kickstarter, the largest U.S. crowdfunding website, has raised nearly $4 billion for more than 150,000 projects. Yet crowdfunding is unlikely to mobilize the resources needed to tackle major problems, such as eliminating epidemics, and is too reliant on spontaneous giving by micro-donors moved by a story to strategically target resources.

Bilateral agencies like USAID are experimenting with non-traditional approaches to financing global health, such as pay-for-success development impact bonds and protections to non-governmental lenders. Most financing innovations rely on private-sector collaboration. Additionally, one of the earliest large-scale U.S. partnerships with developing countries was the Millennium Challenge Corporation (MCC), created in 2004 under the George W. Bush Administration. With a current annual budget of $905 million, MCC provides grants to countries committed to good governance, economic freedom and investing in their citizens, and is a leader in transparency with accessible information. Yet, another early model deserves additional attention.

A trailblazing public-private partnership launched two years before the MCC, the Global Fund to Fight AIDS, Tuberculosis and Malaria (Global Fund), has a very focused mission — ending the three most devastating infectious diseases — and a broad financial burden-sharing approach.

The Global Fund prioritizes: results-based work, accountability, preparing countries for graduation from aid, investing in people as assets for development and inclusive governance. These five priorities make the Global Fund not only an exemplar for global health but also for development assistance in general. The U.S. government has firmly backed the Global Fund’s approach by contributing $1.35 billion annually to the organization in recent years.

While most development agencies have monitoring and evaluation programs and conduct impact assessments, the Global Fund was an early mover on results-based decision-making and a growing number of agencies tried to do the same.

This approach has delivered. For instance, the Biomedical Centre on Public Health published a study in 2015 on lives saved in relation to Global Fund grants. Global Fund grants are closely associated with reductions in all-cause adult mortality and malaria-specific under-five mortality. The Global Fund partnership has supported programs that have saved the lives of more than 27 million people to date, with the number of people saved accelerating year by year since 2005.

In countries where the Global Fund invests, 17.5 million people are on antiretroviral therapy for HIV. In 2017, 5 million people were treated for TB and 197 million mosquito nets were distributed to stop the transmission of malaria in these countries as well.

Maximizing impact is a preeminent aim in the Global Fund’s 2017-2022 strategy. The Global Fund works relentlessly to maximize efficiency and is often able to achieve savings in finalizing a grant award with an implementing country. The Global Fund has worked with implementing countries to develop a register of high-priority projects in need of funding, and it reinvests savings achieved during the grant-making process in these projects. For example, through this process the Global Fund was able to devote an additional $3 million to Lesotho to fund TB diagnosis activities and HIV prevention programs. 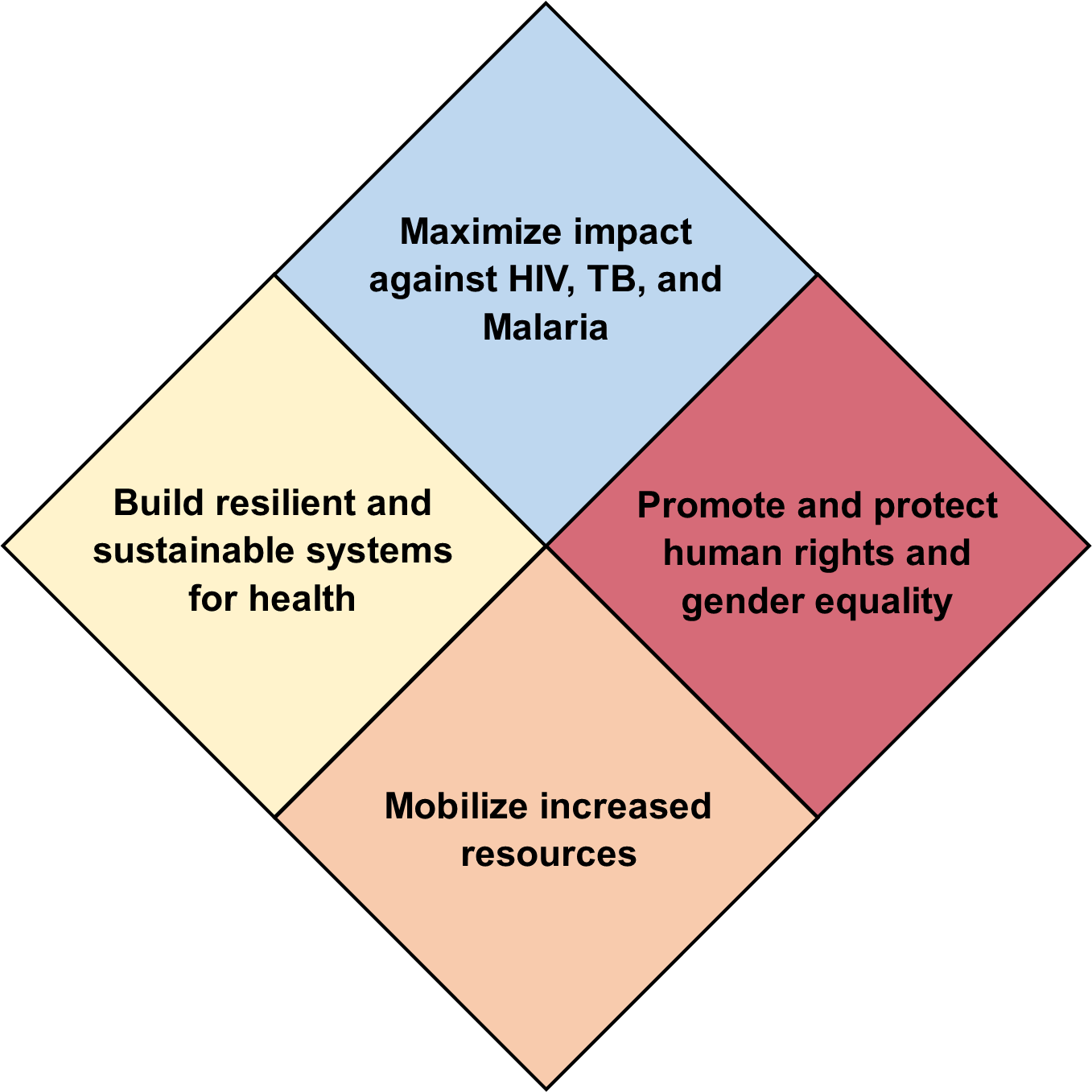 The Global Fund places a premium on accountability. It has a rigorous, evidence-based grant application process and provides three-year grants to governments and local entities, including many faith-based organizations (FBOs).  It then holds partners accountable for what they promise. The Global Fund contracts with Local Fund Agents (LFAs) to make sure funding is spent as agreed. LFAs verify and report on grant performance and the distribution of grant resources to principal recipients and sub-recipients.

The Global Fund holds countries accountable for their funds through the Office of the Inspector General (OIG), which reports directly to the Fund’s Board, working with (but not for) the Global Fund’s Secretariat. Mouhamadou Diagne, the inspector general, observes:

Wrongdoing, in all its forms, is a threat to the Global Fund’s mission to end the AIDS, tuberculosis and malaria epidemics. It corrodes public health systems and facilitates human rights abuses, ultimately stunting the quality and quantity of interventions needed to save lives.

The OIG promotes best practices, reduces risks and reports on any misuse of funds by conducting frequent audits and investigations to improve processes. The “I Speak Out Now” initiative was designed to encourage grant implementers to report fraud, abuse and human rights violations. All of the OIG’s reports can be found on the audits and investigations page of the Global Fund’s website.

In the rare instances when fraud occurs, there are consequences. Most recently, the Global Fund uncovered misuse of resources in Zambia. The Medical Store Limited (MSL), a drugstore in Zambia, notified the Global Fund that over $1 million of donor-sponsored commodities had gone missing. The Global Fund supported a national task team to conduct high-profile investigations and enforcement operations that led to arrests – accountability seen by Zambia’s public.

The OIG has helped recover over 98 percent of funding from fraud cases. And to prevent future cases of fraud, the OIG presents case studies of instances where funds have been misused. This insistence on accountability makes the Global Fund an exemplar among development assistance partnerships.

Like U.S. government programs, the Global Fund commits to helping countries transition from international assistance. The Global Fund aims for external assistance to “support sustainable responses for epidemic control and successful transitions.” Implementing countries are required to either actively engage in sustainability and transition preparedness or begin implementing a transition, depending on the country’s income level. Countries that achieve upper-middle income status are no longer eligible to receive grants.

With the Global Fund partnering to help countries reach sustainability, many have already graduated from grants. During the 2017-2019 allocation period, there are 11 countries in active transition from Global Fund financing that are receiving dedicated help to ensure the transition is a success. These include Albania, Algeria and Cuba for HIV programs; Albania, Belize, the Dominican Republic, Paraguay, Panama, Suriname and Turkmenistan for TB programs; and Botswana and Sri Lanka for malaria programs. There are currently many more countries that are in the process of actively transitioning from receiving funding. The Global Fund website also shows the projected transitions through 2025.

The May 2018 Global Fund board meeting in Macedonia highlighted the importance of sustainability in the road to transition from international assistance. Macedonia recently transitioned out of HIV funding. The transition process required more domestic funding from the Macedonian government to ensure that civil society maintained a vital voice in the country’s response. A sustainable transition requires not only focusing on government capacity, but also the roles of civil society, the faith community and the private sector as watchdogs and partners to sustain progress.

The Global Fund also helps countries prepare for transition by incentivizing domestic resource mobilization. The Global Fund holds back 15 percent of a grant until the government shows that it is increasing its domestic investment in health. This hard-nosed approach ensures the sustainability of health systems. Earlier this year, the Global Fund reduced its grant to Nigeria by $170 million because the government failed to meet its commitment.

In discussions with presidents, prime ministers and parliamentarians, Global Fund officials stress that governments not only need to increase the share of the national budget spent on health but also their overall revenue collection. In the past six years, the Global Fund has seen an average of a 41 percent increase in domestic financing for health in countries where it operates. This translated into $6 billion in additional funds to fight the three diseases.

Investing in People as Assets

Human development is based on enlarging people’s freedoms and opportunities to prosper. Nobel Prize winning economist Amartya Sen (in his book Development as Freedom) and others have stressed enabling people’s agency to thrive. Health and education are critical enablers to achieve that. The MCC, for instance, focuses on investing in countries which prioritize health and education as keys to people thriving and economic growth. Similarly, while the Global Fund’s mission is focused on the three diseases of HIV, tuberculosis and malaria, its premise is that when people are healthy, they can tap into their gifts and capabilities, and prosper.

As an example, the Global Fund has had a significant impact on human development in Rwanda. It worked with that country to confront HIV/AIDS with the goal of coordinating development partners around a unified national strategy. This approach has led to an increase in domestic investments in health and more community-based health care. The partnership to combat HIV — the most devastating threat to Rwandan development since the 1994 genocide — contributed to national buy-in on other educational and economic issues. Reciprocally, the ensuing economic growth provides the wherewithal to spur better health outcomes in the future – creating a “virtuous cycle” of opportunity — rather than a vicious cycle of poverty and disease.

Like the MCC, the Global Fund is committed to country ownership, multi-stakeholder participation and inclusive governance. It is not just a public-private partnership, but it actively integrates and supports civic actors, recognizing that civil society needs to have a voice in order to partner with others to improve health. Where a government falls down on the job, civil society can hold it to account. The Global Fund facilitates strengthened working relationships between civil society and the public sector.

In Morocco, the Global Fund has ensured marginalized communities have a voice in decision-making. The Country Coordinating Mechanism, which oversees grant implementation, includes representatives of vulnerable and stigmatized groups affected by HIV. Civil society and the government work hand in hand in the response to control the epidemic. The Global Fund’s focus on inclusiveness has also been successful in Brazil. A study from Brazil by Gómez and Atun explores how the Global Fund was able to foster a greater commitment to civic mobilization, empowerment and accountability. The Global Fund’s approach to inclusive governance improves a country’s ability to respond to future epidemics.

The Global Fund is a particularly efficient development financing agency, raising and disbursing an average of $4 billion per year with a small staff of about 700 people. It has a low overhead and maintains only one office. The Global Fund defrays office costs by co-locating with four other health organizations, including GAVI. And it has ranked very highly in several independent assessments.

The Global Fund puts a premium on results, accountability and a path to graduation from aid. It also invests in people’s broader potential as well as civil society and private sector voices. Donors should look to the Global Fund as a model when considering how to optimize the performance of other development programs and institutions.

Comments on World Bank White Paper on a proposed FIF for Pandemic Prevention, Preparedness and Response

Friends submitted the following comments to the World Bank regarding its recent white paper proposing a financial intermediary fund (FIF)...